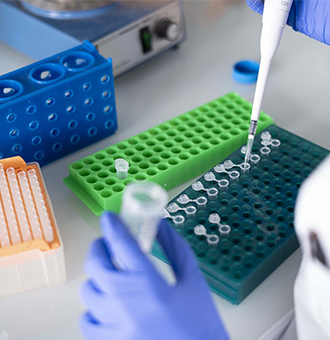 Our response to the coronavirus COVID-19 pandemic

« Since the beginning of the COVID-19 pandemic, the FRM (Fondation pour la Recherche Médicale) has strived to respond in the most efficient way : it took only 5 weeks since our first appeal for donations to grant support to research teams working on SARS-CoV-2 coronavirus. It was critical for us to ensure that every donation could help funding the most promising and innovative research projects : we achieved that goal by establishing strong scientific partnerships with two of the main funders of public medical research in France.

Solidarity is still however needed and we hope that the incredible mobilization of donors and partners will linger on making possible to respond to the important needs of research teams. The more donations we will get, the more projects we will be able to support. »

Denis Duverne,
Chairman of the Supervisory Board

Support innovative research projects that promise to advance knowledge of all diseases.

But research is a long-term endeavor, and it may take many years before it results in visible human health benefits.
To objectively measure the effectiveness of its support in the short and longer term, the FRM devotes part of its activities to assessing the impact of its efforts. In 2017, researchers supported by the FRM produced more than 1,200 scientific publications.

Schizophrenia: a better understanding of the relationships between immunity, brain and schizophrenia

Amount collected by Venite Cantemus during the organized concert on the 16th to 17th November 2019 at the Opéra Comic. This amount was given to FRM in order to finance Mélanie Druart's thesis. Thesis defence was held on the 25th September. Mélanie Druart is the author of a scientific publication that was featured in a renowned psychiatric journal.

Immune system and schizophrenia: a link suspected for years

During her PhD, Mélanie Druart, supervised by Corentin le Magueresse, sought to better understand the link between complement C4 and schizophrenia. To this end, she artificially increased the level of C4 in mice during embryonic development, in a region of the brain involved in dysfunctions observed in patients. In these mice she observed a reduction in connections between neurons, as well as alterations in specific neural circuits. As a consequence, information is less well transmitted in the brain. In addition, the researchers showed that certain behaviors, particularly short-term memory, were modified in these mice. This work has made it possible to reproduce in animals cellular mechanisms and behaviors already known in schizophrenic patients, which makes it possible to establish a definite link between immunology - more precisely complement C4 -, the brain and schizophrenia.

These results were obtained by Mélanie Druart during her PhD carried out in Corentin le Magueresse's team at the Institut du Fer à Moulin in Paris.

For a 24 hour period on June 20th, 2020, over 150 artists will come together virtually in support of Fondation pour la Recherche Médicale (FRM), France. The goal is for the arts community to raise money, support, and awareness for the scientific and medical community working relentlessly on treatments and a vaccine for COVID-19.

These artists will be live broadcasting via Instagram from their work spaces, studios and the street. Although physically distanced, they will come together to lend their talents and resources to aid in the effort to end the COVID-19 crisis. Across France and the world, artists will be creating live works to be donated to support the Fondation pour la Recherche Médicale, France.

This collective of artists will be using this day as a call for donations to the important work of the FRM as well as donating artworks to be sold through monart.art.
The donation platform will use gandee.com as the portal for collecting contributions.
Both monart.art and gandee.com have partnered with Carpe Diem to provide their platforms completely free of fees with 100% of the renvenue going directly to The FRM.

The FRM would not be what it is today without its supporters and patrons. Our supporters have been engaged for many years, sharing their values for innovation and progress for public health. They remain informed about the FRM’s different campaigns, research progress and major discoveries, taking turns in different media to convey the Fondation’s message.

“I have the chance to visit FRM-funded laboratories regularly. I’m fascinated to see all these small steps that lead to great progress. I’m proud to share their initiatives and discoveries with the general public.”

Doctor, television and radio host and commentator, and novelist

“In 2013, I agreed to be an FRM spokesperson because I appreciate their focus on being of service to all patients and contributing to scientific progress in all areas of health. Since childhood, I have had a great admiration for researchers.”

“With the FRM, no illness, no patient, no scientific domain is ignored. This approach to research appeals to me. I’ve supported the FRM for many years because I have full confidence in its rigor and expertise.”

“As an FRM sponsor, I’ve had the chance to meet FRM-supported researchers and doctors, and I’ve been astounded by their inventiveness, their generosity, their technical skills, and equally by the humility of these women and men who devote their lives to saving ours.”

We use “cookies” to identify you when you visit our website. They are really helpful and we rely on them in order to understand what you do you when you visit : how do you use our website, which articles and sections are popular etc… For more information or to deny the use of cookies, please visit this page (in French)
Accept